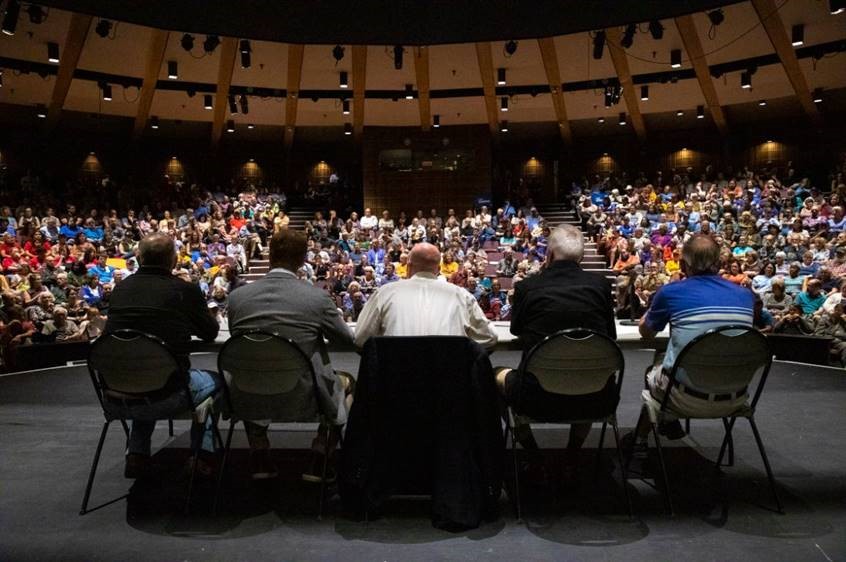 Thank you to the many thousands of Alaskans who are staying engaged during this critical time for our State. I have heard from hundreds of my constituents regarding the Governor’s vetoes, and I appreciate the personal stories I have received as well as all the advocacy that has been done for the University, arts, Medicaid, homeless assistance funding, and the many other programs and services that would be affected by the Governor’s budget vetoes.

I’ve heard a lot mentioned about the need for a balanced state budget and the Gov’s vetoes are a way for us to get there. Let me add a few facts.

We currently have a balanced budget. The operating budget passed by the House and the Senate not only was balanced but also had a surplus of around $600M. If we distributed that surplus as a PFD check it would be about $1000.

It’s when we look to increase the check that we run into funding problems. What the Gov has done is to cut an additional $400M from the passed budget which will be devastating to our state and would allow for a $1600 PFD.

Some may say that a cut to the PFD would affect the lower income portion of our population disproportionately but cuts to many social programs would more greatly affect this same population. The cuts would also negatively affect the economy like we’ve never seen before. It will drastically affect the future of our State, as we know it.

Many people have asked the question: “what type of State do we want to live in?” In other words given the reduction of revenue over the last several years what level of services do we want to retain and what do we want to cut? Do we want to continue to pay out record amounts in PFD checks while at the same time we have to cut things like the university, K-12 education, public safety, senior benefits etc. I feel like the people have spoken in their overwhelming response that myself and other legislators have received lately regarding the budget vetoes. All types of varied groups have spoken up including: Bankers Association, Chamber of Commerce, University, Homeless shelters, Domestic violence shelters, Arts associations, Builders associations, healthcare providers, Rasmussen Foundation, and the list goes on. The people are speaking and I’m hearing them say…..Override the vetoes. I’m not sure how we’ll get there but it seems clear to me that that’s where we need to go.

As for the special session and the progress of the veto override it’s not encouraging to have only 38 legislators in Juneau especially considering that we need 45 yes votes to approve an override. There are still 22 or so legislators in Wasilla who don’t seem willing to come down to Juneau. Tomorrow is the override vote so let’s hope some of them change their minds although currently they seem loyal to the Gov and his vetoes.

There’s hope that if we don’t have a successful override vote that we can add back funds in the capital budget that still needs to be passed very soon. Maybe a grand bargain can be reached that all sides will agree to. I would much prefer a total override of all the Gov’s vetoes and I am still hoping that all legislators will come down to Juneau to vote on the House floor during our scheduled joint session on Wed July 10th.  The last day for override is this Friday July 12th. 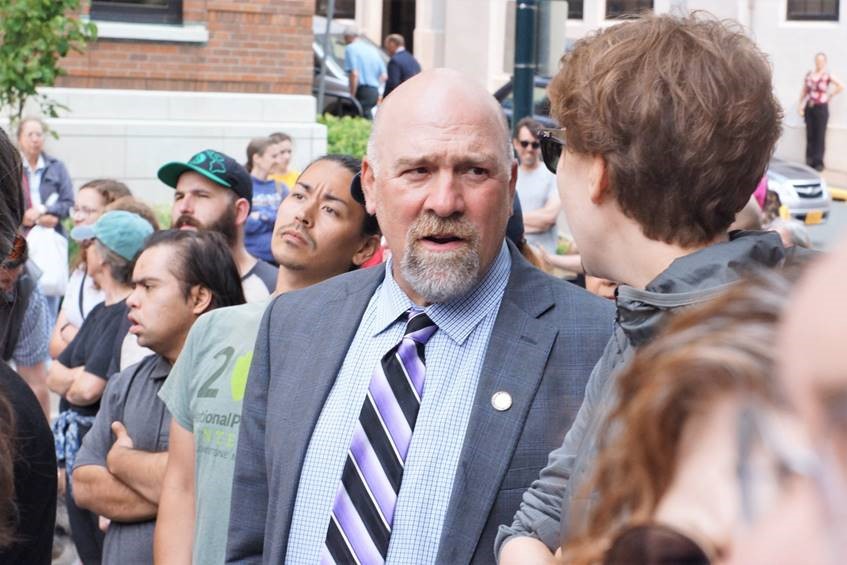 Adam talks with a Juneau resident during a rally on Monday, July 8.

Contact me with your questions, concerns, and ideas. You can always reach me at rep.adam.wool@akleg.gov and at 907-452-6084. We are back in Fairbanks for the interim, so feel free to stop by the Fairbanks Legislative Information Office or call to make an appointment with my staff.