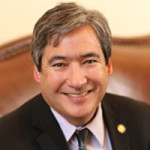 Juneau – The 13 members of the Alaska Independent Democratic Coalition (AIDC) have chosen Representative Sam Kito (D-Juneau) as the new Minority Whip. Rep. Kito replaces the late Rep. Max Gruenberg, who passed away last month while in office, as the Minority Whip. The Whip is the second highest leadership position within the Coalition.