NEWS: Medicaid Expansion Lawsuit Should Not Continue Without Legislative Approval

ANCHORAGE – Earlier today, the Alaska State Legislature’s Republican-controlled Legislative Council failed to withdraw its ill-advised lawsuit against Governor Bill Walker over his decision to accept federal funds to expand eligibility for the Medicaid program in Alaska. The Legislative Council, which only includes one member of the minority in the House and Senate, met behind closed doors in Anchorage to discuss the Council’s lawsuit. At the conclusion of the meeting, the Council took no action. The result of this inaction is that the lawsuit will continue.

If that chill in the air is any indication, it looks like summer is drawing to a close. I hope everyone had a great summer and got a chance to visit the Fair, and I hope you’re geared up for a lot of fun winter activities. 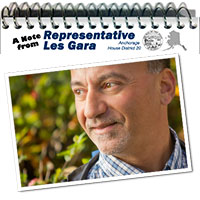 Today Rep. Sam Kito III and I called on those suing the Governor over Medicaid Expansion to save the state money, in a few ways.

First, as you know, I think spending $450,000 on a lawsuit instead of passing the pending Medicaid Expansion & Reform bill (which would result in $330 million in budget savings over just the first six years) is imprudent. It’s hiring lawyers to dig a deeper budget hole