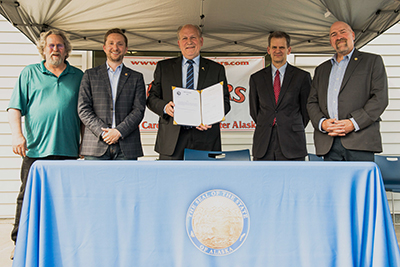 “Alaska’s EMS providers save lives because they have equipment and trained men and women standing by to respond to emergencies. Unfortunately, many of Alaska’s EMS providers are financially strapped and unable to keep valuable employees and make much-needed equipment upgrades. This bill will free up millions in federal funding to remedy that situation, but more importantly, the bill will ensure that help is on its way when Alaskans need it the most,” said Rep. Wool.

EMS providers in Alaska are only reimbursed for about 30 percent of their costs for transporting Medicaid-eligible patients. In fiscal year 2017, the average claim submitted was $1,100. However, the average reimbursement from Medicaid was only $300 for each ground-based EMS transport, leaving an average of about $800 unreimbursed to EMS providers. This bill will help cover those unreimbursed costs.

Last year, HB 176 would have brought in an additional $11 million in federal funding based on the number of Medicaid patients who used EMS services. However, that amount is expected to be larger due to the significant increase in the number of ambulance calls caused, in part, by the ongoing opioid epidemic.

“Most of the EMS providers in Alaska are run by cities and boroughs which means that uncovered costs are eventually paid by local taxpayers, or sometimes the services suffer. By making more of those costs eligible for federal reimbursement, this simple bill will save Alaskans money and make sure life-saving EMTs and EMS providers are just a call away,” said Rep. Wool.

Earlier this year, House Bill 176 passed both the Alaska House of Representatives and the Alaska State Senate by unanimous votes. Alaska Governor Bill Walker signed the bill into law today during a ceremony at the Ester Volunteer Fire Department Building. The law takes effect immediately.