Juneau – Tonight, the Alaska House of Representatives rejected changes made by the State Senate to a key piece of pending legislation to reform Alaska’s flawed system of subsidizing the oil and gas industry with tax credits. The State Senate significantly weakened House Bill 111, which passed the House last month. 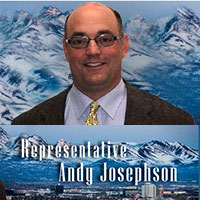 The seasons are changing in Juneau and I’m still here working hard to represent you and do what I hope is best for all Alaskans. I want to extend a special thank-you to those who phoned in to the University Subcommittee meeting last Saturday. We in the Capitol are sometimes called leaders, but we lead best with input from our constituents.

Thank you for subscribing to my newsletter and staying involved with the goings-on of our state. It continues to be an honor to represent you in Juneau and to work on your behalf. Much has happened here in the last couple weeks. I hope this update finds you well and helps you stay informed.

Juneau – Legislation advanced out of the House Resources Committee today to allow municipalities in Alaska to establish their own rules to control trapping. House Bill 201, sponsored by Representative Andy Josephson (D-Anchorage), limits municipal regulations to the limited purpose of preventing injuries to people and domestic animals.