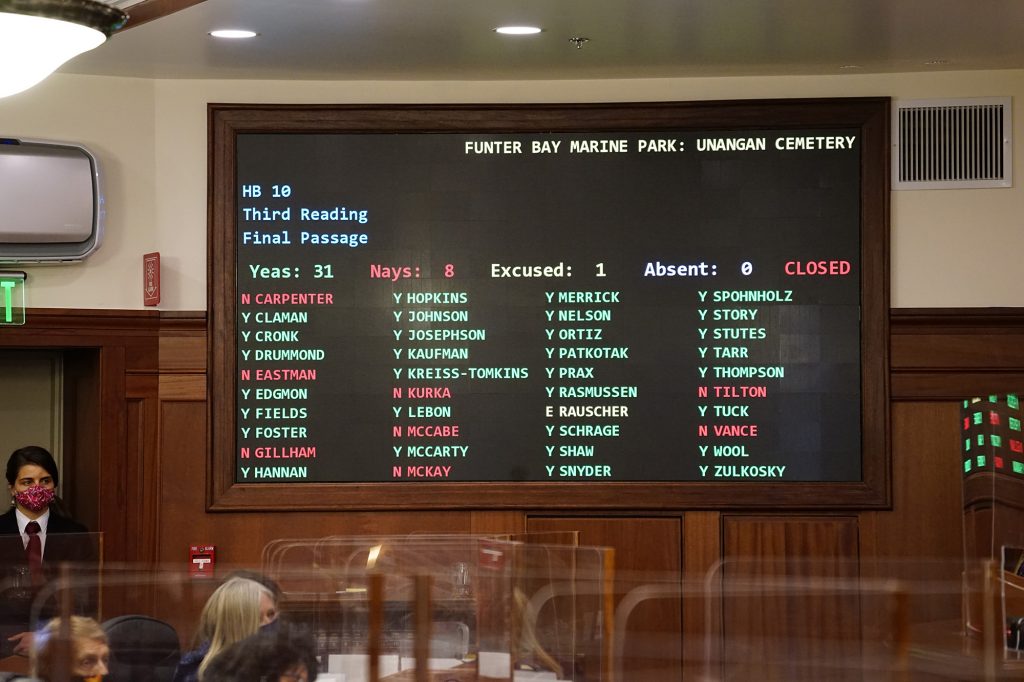 JUNEAU – The House of Representatives today passed a bill to protect a cemetery in Southeast Alaska where Unangax people, taken from their homes on the Pribilof Islands during World War Two, were placed in an internment camp.

House Bill 10 transfers a parcel of land from the Department of Natural Resources Land and Mining Water Division to the Division of Parks and Recreation, adding the land to the Funter Bay Marine Park to ensure Alaskans’ access to the site in perpetuity.

“This bill represents a significant step in the effort to confront a dark chapter of Alaska’s history, when some of our own people were taken from their homes and placed in an abandoned cannery rather than treated with respect and welcomed into one of our communities as fellow Alaskans,” said Rep. Sara Hannan (D-Juneau), the bill’s sponsor.

“After traveling to the cemetery and spending time with the survivors and descendants in my district, it’s impossible to overstate the cultural and emotional significance of this site,” added Rep. Bryce Edgmon (I-Dillingham).

When the Japanese invaded the Aleutian Islands during WWII, the Unangax people were forcibly removed to Southeast Alaska. Some were sent to Killisnoo near Angoon, others were sent to Burnett Inlet, Ward Cove in Ketchikan, Wrangell, and the rest were sent to Funter Bay near Juneau.

They were given little notice, and the villagers could take only what they could carry. The people were abandoned in old cannery bunk houses not meant to house so many people and not built for protection from winter’s harshness. Entire families were sheltered in small cubicles that were separated sometimes only by blankets. The living conditions were unsanitary, and there was inadequate food supply, no medical care, and no facilities for bathing, cooking or using the bathroom.

Fewer than 30 miles away in Excursion Inlet, 700 Nazi Afrika Korps officers were imprisoned at a prisoner-of-war camp. The Nazis, sworn enemies of the United States and allies, were treated far better than the Unangax because their conditions were guaranteed by international law. The 700 German prisoners all returned home after the war without a single death during their imprisonment.

Thirty-two Unangax died, and the survivors were left in the camp almost two years after it was considered safe to return home. The deadly conditions of the camp left the Unangax people to suffer needlessly. The descendants of those who were lost have maintained the grave sites for 79 years.

HB 10 passed 31-8 heads to the Senate for consideration.