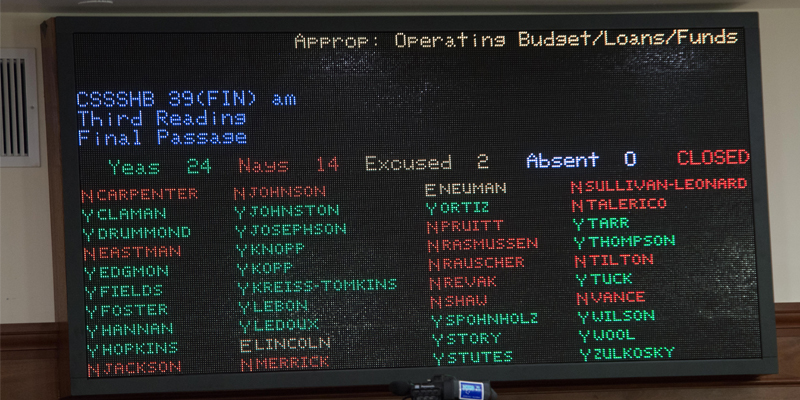 The budget expresses the House Majority’s commitment to streamline government while also protecting schools, public safety, and other critical services that underpin our economy.

“We recognize that we have a deficit and must make substantial cuts to keep downward pressure on spending,” House Speaker Bryce Edgmon said. “At the same time, this budget demonstrates our commitment to fund core services and reject measures that would solve our fiscal problems on the backs of Alaska’s most vulnerable.”

“Ideas presented by Democrats, Republicans, and Independents – from the House majority and minority – are in the budget that passed, and each of the governor’s proposed reductions received a vote through the process we followed this year,” said Rep. Neal Foster, who co-chairs the Finance Committee. “No one got everything they wanted, but we reached a strong compromise and look forward to working with the Senate and the administration to finalize the budget.”

$4.3 billion of unrestricted general fund spending was approved for Fiscal Year 2020, meaning there is a $200 million reduction compared to what will be spent in this fiscal year.

Alaska has no medical school and a critical shortage of doctors, so the budget also rejects the governor’s proposal to eliminate funds for the WWAMI program.

To help improve public safety, the Village Public Safety Officer program is fully funded, the Department of Public Safety gets funding to add two sex crime investigators in rural Alaska, and there is funding to hire new prosecutors, public defenders, and support staff to reduce the backlog of criminal cases.

From here, H.B. 39 heads to the Senate for consideration. If changes are made in that body, a joint House-Senate conference committee will convene to sort out the differences before final passage from the Legislature. The governor then has 30 days to sign the bill or to make vetoes.