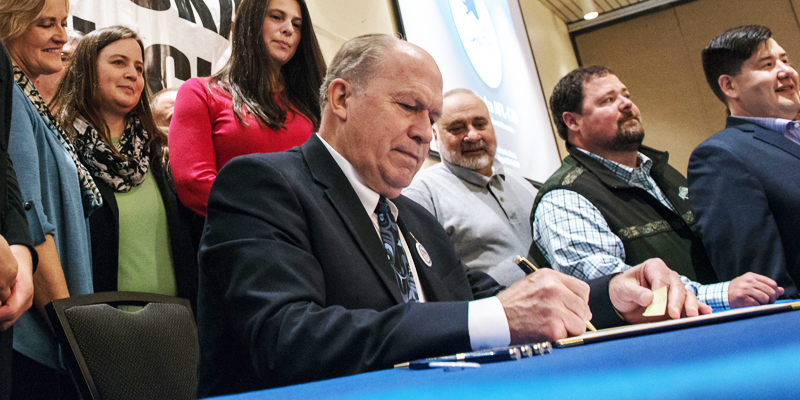 Anchorage – Bipartisan legislation to reform Alaska’s workers’ compensation system was signed into law this morning during a ceremony held in conjunction with the annual AFL-CIO Summer Convention. Alaska Governor Bill Walker put forward House Bill 79 to modernize the system and to clearly define for the first time in Alaska’s history who can be categorized as an independent contractor. Representative Andy Josephson (D-Anchorage) carried the bill on the House floor and issued the following statement upon learning that HB 79 has become law.

“Alaska’s workers’ compensation program serves as a vital safety net for workers hurt on the job while also mitigating the financial liability for businesses. This bill strengthens the system through a series of smart reforms that will help prevent fraud and ensure the system is there when workers need it the most,” said Rep. Josephson. “Perhaps the most significant reform in the bill is to clearly define the distinction between independent contractors and employees. This clarification will help prevent good actors from going out of business from fines while making it more difficult for bad actors to fraudulently avoid paying workers’ compensation insurance.”

In addition to the independent contractor definition, HB 79 streamlines the process for obtaining a corporate exemption from workers’ compensation coverage, allows businesses to report data and make payments electronically, and increases funding for the Workers’ Compensation Safety Administrative Account, which funds the fraud unit that tracks down fraud and abuse.

House Bill 79 passed the Alaska House of Representatives earlier this year by a vote of 25-14 and the Alaska State Senate approved the bill by a unanimous vote of 19-0. Alaska Governor Bill Walker signed HB 79 into law today during a ceremony in Fairbanks.