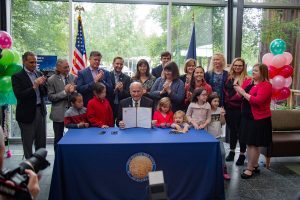 HB 214 requires the Alaska Department of Education and Early Development to work with school districts to develop an education and prevention program focused on youth in grades seven through 12. The bill stipulates that the program include parental notification, training for both teachers and students, and a periodic review to ensure the program is consistent with best practices.

“Relationships can be difficult, and they often provoke some really powerful emotions. The goal of Bree’s Law is to show teens how to navigate their inter-personal relationships free from physical and emotional violence,” said HB 214 sponsor Representative Harriet Drummond (D-Anchorage). “Bree Moore was no different than the millions of young women and men who are preyed upon daily by those who lash out with anger and violence. Tragically, Bree was killed, but I am confident that by using her death as a constant reminder we can craft a locally driven program that can work in every school in Alaska to prevent violence.”

The objective of the “Bree Moore Teen Dating Violence Awareness and Prevention Program” is to teach students how to develop healthy relationships and recognize the warning signs of an abusive relationship. House Bill 214 also designates February as “Teen Dating Violence Awareness and Prevention Month” in Alaska to align with the national efforts to bring attention to this important issue.

“Parents don’t get to determine the fate of their children. If it were so, I would never have chosen a violent death for my daughter at the hands of a man she trusted. Her death was preventable, but she didn’t know how to recognize and deal with dating violence. Thankfully, Bree’s life and death are being used as an example to help prevent future acts of violence. Bree’s mother and I take solace in that,” said Bree Moore’s father, Butch Moore.

House Bill 214 passed the Alaska State Senate in May by a unanimous vote of 19-0. The bill unanimously passed the Alaska House of Representatives in February, and the House then voted 39-1 to concur with the changes made by the State Senate. Alaska Governor Bill Walker signed the bill into law today during a ceremony in Anchorage.