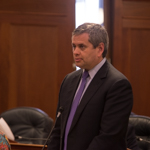 Juneau – Today, the Alaska Legislature passed legislation to expand job opportunities for veterans and members of the National Guard. House Bill 2, sponsored by Representative Chris Tuck (D-Anchorage), is supported by the United States Department of Defense and the National Federation of Independent Businesses-Alaska. The bill gives private businesses in Alaska the ability to offer a hiring preference to veterans of the armed services and members of the National Guard.

“Military veterans and National Guard members are some of the best employees you will ever come across. The skills and training developed through their military experience easily transfers into business and industry. It just seems logical to give them a hiring preference. It’s allowed for state government, but until now private businesses could not prioritize hiring these brave men and women. This bill is good for business, and it’s good for veterans,” said Rep. Tuck. “Today’s vote is another example of the support we show to our veterans and National Guard members, and I want to thank my colleagues for making this bill a priority before the end of the session.”

Veterans and National Guard members in Alaska and every other state are offered a hiring preference for employment in the public sector, but private employers are precluded from offering a similar preference under the Civil Rights Act of 1964 unless the state passes authorizing legislation. HB 2 is the authorizing legislation for the State of Alaska. Today’s passage of HB 2 makes Alaska the 38th state to adopt legislation to give private employers the option of offering a veteran hiring preference.