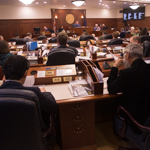 Juneau – Today, the Alaska Legislature made significant progress to address the ongoing fiscal crisis that has left the State of Alaska with a $2.3 billion budget gap. The House and Senate both passed the new compromise version of Senate Bill 26 that was referred from the conference committee this morning. The new version of the bill includes a spending cap on the use of earnings from the $65 billion Alaska Permanent Fund. SB 26 sets rules for a structured and predictable draw from the Earnings Reserve Account (ERA) to pay for Permanent Fund Dividends and to help pay for essential public services.

“The Alaska Permanent Fund is a uniquely Alaskan asset that we helped protect today with the passage of Senate Bill 26. Our Coalition insisted on the language putting a spending cap on the earnings from the Permanent Fund to help prevent future legislatures from making ad hoc draws that could endanger the health of the fund itself,” said Speaker of the House Rep. Bryce Edgmon (D-Dillingham). “Just as SB 26 safeguards the funds itself, it also ensures the sustainability of the annual dividend, allowing all Alaskans to share in our tremendous natural resource wealth into the future. Today’s vote was significant because it was not about party affiliation and it was not about urban or rural Alaska. Today’s vote was significant because it was about the future of Alaska.”

SB 26 puts in place a percent of market value (POMV) approach for the use of the earnings of the Alaska Permanent Fund. For the next three years, the POMV draw will be 5.25 percent of the fund’s average value over the past five years. After three years the POMV draw drops down to 5 percent. The $2.7 billion that will be generated from a POMV draw in Fiscal Year 2019 will be split between paying the 2018 PFD and helping to pay for essential public services. The only exception to the restriction on a yearly POMV draw is for additional inflation-proofing of the Permanent Fund principle from the Earnings Reserve Account. The fund has not been inflation-proofed in the last three years. The version of the operating budget passed by the Alaska House of Representatives includes $942 million to inflation-proof the fund. The Senate version of the bill does not include inflation-proofing.

“Last year our Coalition took charge and responded to the fiscal crisis and ongoing recession. We passed a comprehensive fiscal plan to the Senate that included a POMV draw as part of a larger plan but not the only part of a plan. We felt our plan was fairer because we didn’t want to burden one group over another. However, our plan was rejected, which is why many of us voted against SB 26 today,” said House Majority Leader Rep. Chris Tuck (D-Anchorage). “Despite our differences on this bill, today’s vote was an example of lawmakers voting their conscience. The Alaska House Majority Coalition is a non-binding caucus and today was a good example of that.”