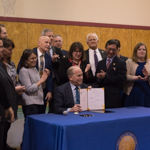 Juneau – Earlier today, Alaska Governor Bill Walker was joined by members of the Alaska Legislature and dozens of elementary school students for the official signing ceremony for legislation to early fund Alaska’s K-12 public education system. The signing ceremony for House Bill 287 was held at the Harborview Elementary School in Juneau. HB 287 authorizes the State of Alaska to spend $1.3 billion for K-12 education and student transportation. The bill was introduced at the beginning of the Second Session of the 30th Alaska State Legislature by House Finance Committee Co-Chair Rep. Paul Seaton (R-Homer). HB 287 was co-sponsored by 22 State Representatives and 12 Senators.

“With the passage of House Bill 287, the Alaska House Majority Coalition has kept our promise to protect education from further funding cuts. For the first time in three years, pink slips won’t go out because of late funding of public education,” said Rep. Seaton, who introduced the bill at the beginning of the Second Session of the 30th Alaska State Legislature. “Stabilizing education funding is critical to protecting teacher jobs, maintaining reasonable class sizes, and providing for a quality education for our youth and future generations. The passage of this bill shows the wisdom of early funding K-12 education every year.”

Signing HB 287 into law is a critical step to bring the current legislative session to a close. A provision to the bill inserted in the Alaska Senate provides an additional $30 million in education funding in Fiscal Year 2020 if some version of Senate Bill 26 passes this session. $30 million is equivalent to a $117 increase to the Base Student Allocation (BSA).