Juneau – Today, the Alaska House of Representatives concurred with the Alaska Senate in approving House Joint Resolution 5 sponsored by Representative Dean Westlake (D-Kotzebue).  The resolution urges the United States Congress to pass legislation to open the coastal plain of the Arctic National Wildlife Refuge (ANWR) to oil and gas development.

“The potential of ANWR is immense and untapped,” said Rep. Westlake.  “I believe the will of the Alaska Legislature to open up ANWR coupled with the renewed interest in resource development by the new President and the new Congress can at long last result in success.  I believe ANWR can be safely and responsibly developed, which will be good for the Alaska economy and our shared future.”

ANWR is estimated to contain over 10 billion barrels of oil and trillions of cubic feet of natural gas.

Earlier this week the Alaska Senate passed HJR 5 by a vote of 18-2 and today the Alaska House of Representatives concurred with the changes made to the bill in the Senate by a vote of 32-4.

Earlier today, Rep. Westlake and Speaker of the House Rep. Bryce Edgmon (D-Dillingham) presented the ANWR resolution to United States Senator Dan Sullivan (R-Alaska) after his speech to a joint session of the Alaska Legislature.  The resolution will now be sent to every member of Congress and President Trump. 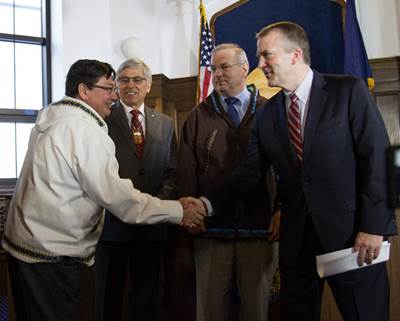