“We can’t fund education, roads, and basic services when all new oilfields pay a 0% production tax,” said House Finance Committee member Rep. Gara. “Some walking the halls in Juneau appear to want seniors, the poor, and working class Alaskans to shoulder the greatest burden in solving our budget challenges. A fair plan should be fair to all, not just the wealthiest among us.”

“Fairness requires the wealthiest corporations in the state to also pay a fair share towards solving our fiscal gap, especially when oil prices rise again,” said Rep. Gara. “A 0% oil tax is a pathway to poverty for Alaska. It will result in unsafe roads, under-educated children, and the inability to build needed energy and other projects.”

The analysis requested by Rep. Gara shows oil companies will contribute little in the form of production taxes to the State of Alaska up to $100/barrel. All oil fields developed after 2002, and all future oil fields, will pay a 0% production tax at prices up to $70/barrel. That includes any oil fields developed in ANWR, ExxonMobil’s Point Thomson Field, and all fields in the National Petroleum Reserve. All of the pre-2003 oil fields, including Prudhoe Bay, Kuparuk, and Alpine pay a minimal 4% tax all the way up to roughly $75 a barrel.

The new analysis made public by Rep. Gara outlines other problems with Alaska’s oil tax structure, including the ability for the oil companies to deduct 35% of their expenses, including big executive salaries, from their taxable income. The 35% deduction is allowed for all post-2002 oil fields despite the fact that Alaska collects almost no oil production taxes on those fields. The deduction also applies to the older oil fields at all oil prices above where the 4% minimum tax is in effect.

“The current oil tax structure in Alaska is supposed to include a 35% tax on profits from the North Slope oil fields but that’s not the way it actually works,” said House Finance Committee member Rep. David Guttenberg (D-Fairbanks). “Even if oil prices go up to $100/barrel the developers of the oil fields brought online after 2002 only pay a 14% profits tax. 14% doesn’t equal 35% no matter how it’s spun to the public.” 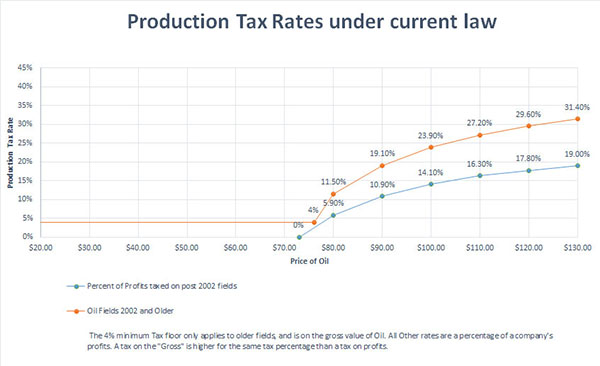 Next week, Rep. Gara plans on filing a straightforward oil tax bill that is fair to oil companies at low oil prices and fixes the problems with the current oil tax structure. Rep. Gara believes the bill will provide Alaska with a path to prosperity as oil prices rise in the future.