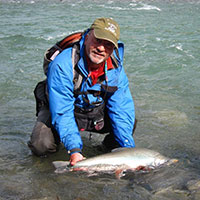 “Our fish unites Alaskans of all backgrounds, whether they sport, subsistence or commercial fish,” said Rep. Les Gara (D-Anchorage), an avid fisherman and freelance fishing writer. “This week’s ruling unnecessarily puts Alaskans at each other’s throats.”

Today, Rep. Gara submitted public comments to the Federal Subsistence Board asking the Board to revise their ruling on reconsideration, so that subsistence sockeye salmon fishing is allowed in a manner that does not diminish the rights of other Alaskans to sockeye salmon, and does not threaten the Kenai Rivers prized wild king salmon, rainbow trout and dolly varden. King runs have been decimated on the Kenai River and need to recover. The proposal allows a gillnet to be stretched halfway across the Kenai River in highly productive rainbow trout and dolly varden runs, and king salmon spawning areas.

“This decision does not recognize the biology of the Kenai River and the need to protect the rivers prized kings, rainbows and dollies,” said Rep. Gara. “It needs to be rewritten so that subsistence sockeye salmon can be taken in a manner that does not harm other fish populations, or diminish the fair access to sockeye fishing by sport, personal use and commercial fishermen.”

The Federal Subsistence Board is accepting public comments on the ruling, which can be subject to reconsideration.

Rep. Gara’s public comments to the Federal Subsistence Board are available here: http://akhouse.org/docs/012615_Kenai-River-Public-Comment.pdf.