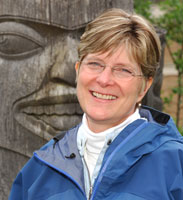 Today, Representative Beth Kerttula (D-Juneau), the House Democratic Leader, resigned her seat in the Alaska State House of Representatives effective Friday, January 24 to accept a position as Visiting Fellow at the Center for Ocean Solutions at Stanford University starting February 3.

“While I have been blessed to serve my constituents in this body, I see this new opportunity as a chance to continue serving Alaska by bringing an Alaskan voice and an Alaskan perspective to ocean policy that will certainly have an impact on Alaska,” said Kerttula.

At Stanford, Kerttula will bring federal, state, and regional decision makers from Alaska, Washington State, Oregon, and California together to discuss policy related to the interplay between oceans, climate and society. The Center for Ocean Solutions is a non-partisan institution focused on providing scientific and legal information to inform ocean policy decisions. The Center selected Kerttula based on her long experience as a policy-maker, her history with and knowledge of ocean and coastal community issues and policies, and her extensive relationships with state policymakers throughout the region. It is a one-year fellowship renewable for a second one-year term, after which Kerttula intends to return to Juneau.

“We are excited to have Beth join our team at Stanford,” said Meg Caldwell, executive director of the Center for Ocean Solutions at Stanford and senior lecturer at Stanford Law School and the Stanford Woods Institute for the Environment . “Her insights from serving as a state lawmaker, her experience with ocean and coastal policy, as well as her relationships with the very people we’re hoping to bring together make her the perfect fit.”

“Beth has been a great leader. We will miss her knowledge, experience, and guidance, and we wish her the best. She’s certainly the right person for the job,” said Tuck. “I appreciate the faith and trust our members have in me. We have a strong and capable caucus, and we’re still focused on the jobs the voters sent us here to do. We are confident House Democratic legislators will still have a positive impact for Alaskans this session.”

Before her legislative service, Kerttula was an attorney in the Alaska state Attorney General’s office in the Oil, Gas and Mining Section. Her experience there enabled her to be a leader in making sure Alaska utilized its most valuable natural resources for the maximum benefit to its people.

Throughout her career, Kerttula has been a leader on coastal and ocean issues in Alaska. As an assistant attorney general, she worked extensively on coastal zone management in Alaska and co-authored a report on the interplay between federal outer continental shelf oil and gas leasing and state coastal zone management. As a legislator, Kerttula was the original sponsor of Alaska’s world-renowned cruise ship pollution legislation and authored legislation and helped secure budget allocations to help the University of Alaska study ocean acidification.  She continued her work on coastal management, leading efforts to defend and improve the Alaska Coastal Zone Management Program.

The House Democratic Caucus first elected Kerttula leader in 2006, and she served seven years in that position. Prior to being elected leader, Kerttula served as House Minority Whip and on the House Finance Committee. She also served on the House resources, judiciary, and state affairs committees as well as on the Special Joint Committee on Mergers in 1999-2000 during the British Petroleum – Arco Alaska merger.

According to Alaska law, the governor has thirty days from the date of the vacancy to appoint a new representative to serve House District 32 which includes downtown Juneau, Douglas Island, Petersburg, Skagway, Gustavus, Tenakee Springs, Excursion Inlet and Hobart Bay. It is longstanding Alaska tradition that the governor select from a list provided by officials of the local party organization for the same party as the departing legislator. In this case, the Tongass Democrats is the local party organization.

Until the governor appoints the new representative, constituents from District 32 can still contact Kerttula’s office for assistance with legislative or other state concerns.