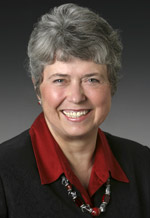 PRINCE RUPERT, BC (February 21, 2011).  The following is Rep. Sharon Cissna's account of the events of February 20th, 2011 at  SEA-TAC International Airport:

"The evening of the 20th of February 2011 started with relief, as I was anxious to get back to the important work of the Alaskan Legislature.  Heading into security after time with the line of passengers, I felt upbeat.  I'd blocked out the horror of three months earlier, but after the pleasant TSA agent checked the ticket and ID, I suddenly found myself directed into scanning by the Seattle Airport's full-body imaging scan.  The horror began again.  A female agent placed herself blocking my passage.  Scan results would again display that my breast cancer and the resulting scars pointed a TSA finger of irregularity at my chest.  I would require invasive, probing hands of a stranger over my body.

Memories of violation would consume my thoughts again."

"Being a public servant and elected representative momentarily disappeared.

Facing the agent I began to remember what my husband and I'd decided after the previous intensive physical search.  That I never had to submit to that horror again!  It would be difficult, we agreed, but I had the choice to say no, this twisted policy did not have to be the price of flying to Juneau!"

"So last night, as more and more TSA, airline, airport and police gathered, I became stronger in remembering to fight the submission to a physical hand exam.

I repeatedly said that I would not allow the feeling-up and I would not use the transportation mode that required it."

"For nearly fifty years I've fought for the rights of assault victims, population in which my wonderful Alaska sadly ranks number one, both for men and women who have been abused.  The very last thing an assault victim or molested person can deal with is yet more trauma and the groping of strangers, the hands of government 'safety' policy."

"For these people, as well as myself, I refused to submit."

"The trip to Juneau is one of adventure in working to restore dignity to government policies designed to build the well-being of our people. All of them.

The trip to the Capitol has been by car, small plane and the Alaska Marine Highway.  It feels like a trip of pride as well."

"The TSA threat of "Do you want to fly?" means something very different to Alaskans.

Flying in Alaska is not a choice, but a necessity.  The freedom to travel should never come at the price of basic human dignity and pride."

FOR IMMEDIATE RELEASE
Alaska Legislator Denied Right To Travel
SEATTLE/JUNEAU (Feb 20, 2011).  Representative Sharon Cissna (D-Anchorage) was barred this evening from exercising her legislative duties under the Alaska Constitution by the Transportation Security Administration.
Cissna, who has been in Seattle for medical treatment, was enroute to Juneau when she was denied access to her flight by TSA officials at Seattle-Tacoma International Airport.  Cissna was singled-out by the TSA for a full body patdown –despite submitting to their controversial full body scan– because the scan showed that she had had a mastectomy.  Cissna was ordered by TSA officials to either submit to this very intrusive patdown or leave the airport.  She is now scheduled to return to Alaska via the Alaska Marine Highway System.
Representative Sharon Cissna is a breast cancer survivor and a well-known champion for the rights of sexual assault survivors.
Contact:  Michelle Scannell, Chief of Staff, (907) 244-4431 (cell)